The largest LGBTQ+ synagogue in the world

Founded in 1973 and catering for LGBTQ+ members from the city and state wide, Congregation Beit Simchat Torah - whose devotional functions are supplemented by community support and social and political activism -  had been searching for a new home for some years. Stephen Cassell of architects Architecture Research Office (ARO) had responded to the brief for a new sanctuary and memorial chapel with elegant and inspiring designs, especially the inclined glass fibre reinforced concrete wall which feeds daylight dramatically into the underground space from the street above. 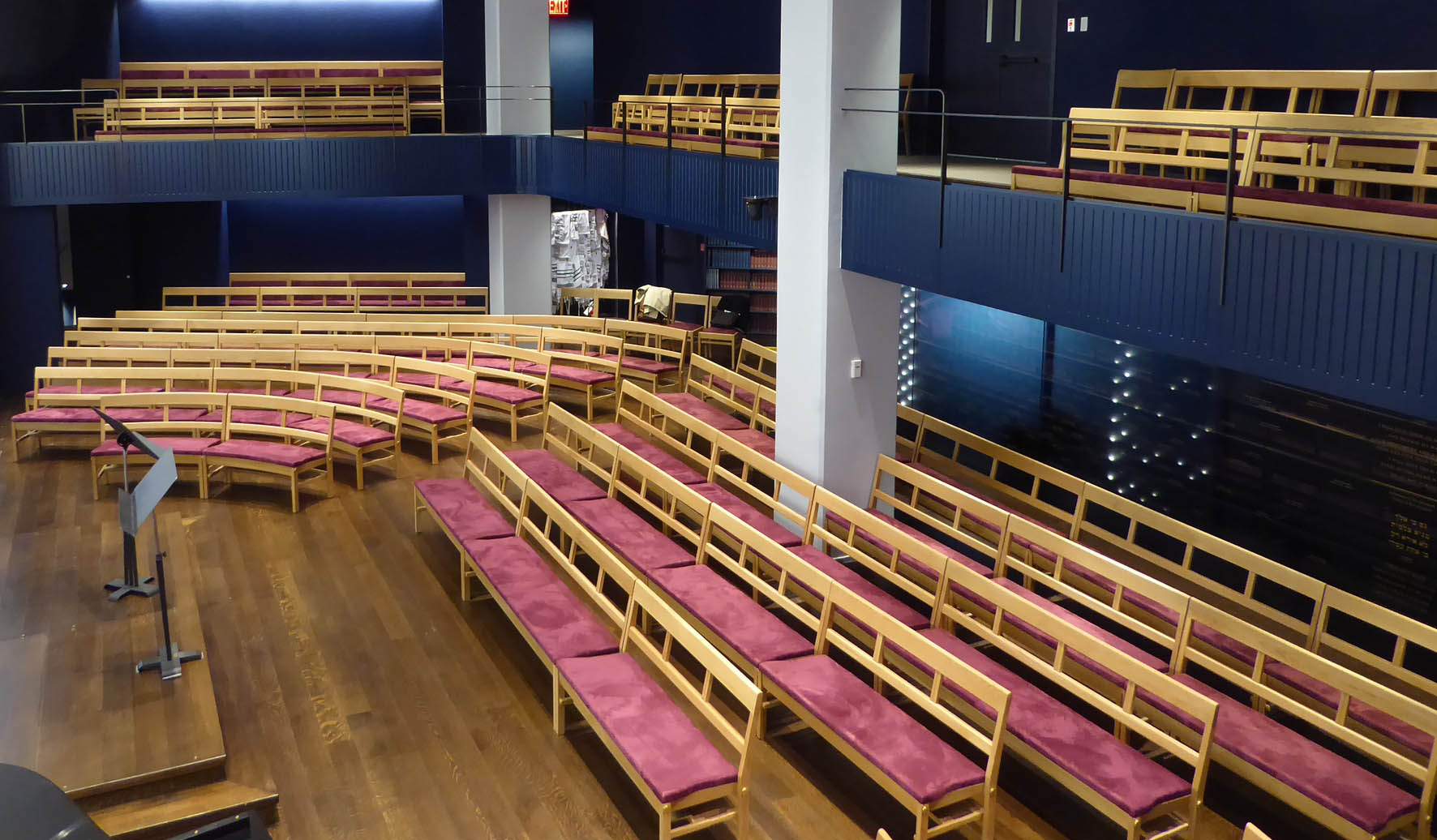 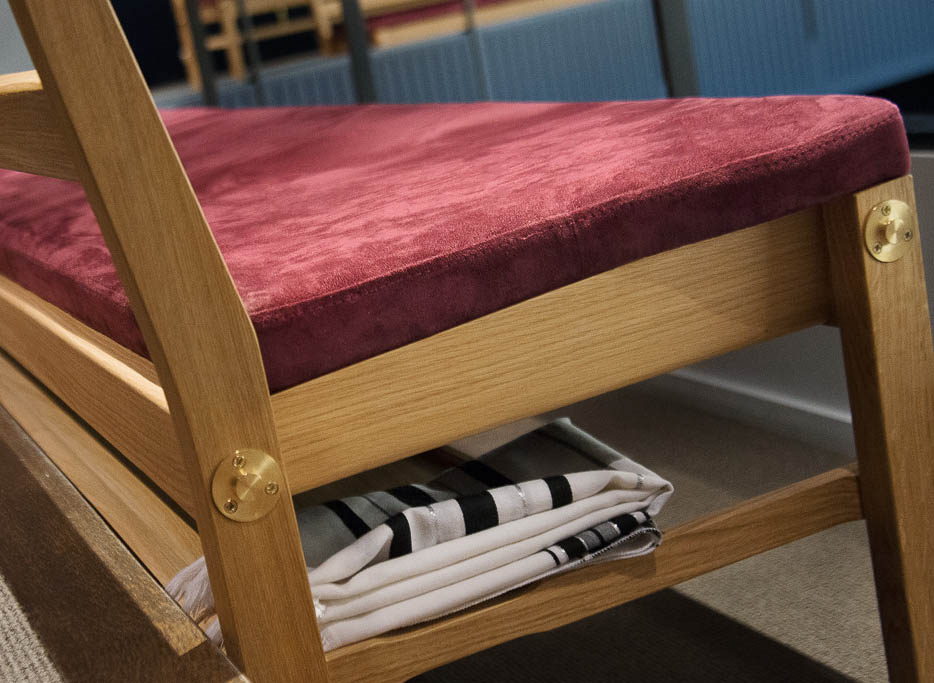 The furniture brief was originally to develop existing designs and make them stackable so that the sanctuary space and minyan chapel could be cleared and used for dinners, Passover seders, celebrations, weddings, bar mitzvahs and events. The chapel, with its memorial wall of partners and loved ones who had died in recent years, is a quieter and more contemplative space.

ARO contacted us at Luke Hughes and a strong working relationship was quickly formed, based on mutual appreciation and respect for each firm’s design expertise.

The liturgical and worship design consultants at Luke Hughes took on the architect’s early concepts, re-working them based on their deep understanding of what the furniture could be made to do in the synagogue sanctuary and minyan.

In addition to custom curved and straight upholstered stacking benches, this project also features these project. Follow the link to configure them for your project:

The Luke Hughes approach is based on the notion that the furniture should not only reflect the architectural quality of the scheme, but enhance and express a congregation’s core values of, in this case, transparency, intimacy and flexibility. Flexibility in this frequently re-configured synagogue sanctuary space has driven many of the design criteria and was fundamental to our designing the curved stacking pews that soften and form the visual flow through the sanctuary.

Early in the design process the decision was made to base the sanctuary scheme on Luke Hughes stackable benches. The design language evolved, first through iterations with solid backs, then with an open frame and rail treatment which allows light to permeate throughout the space. With careful consideration given to the liturgy, the different uses the synagogue sanctuary needed to be put to, and the different types of events that would be held there, the scheme came together with the Luke Hughes team conceiving and engineering not only straight stacking benches, but stacking curved benches too.

The process involved a fusion of traditional steam-bending techniques with digitally controlled 3-dimensional CNC machining, but it wasn’t without its challenges. The implications of designing in a plane of double curvature which is also raked away from the vertical are ones our design engineers both fully understand and have considerable expertise in.

In simple terms, curved stacking benches have hugely complicated geometry. The top rail has to curve upwards as well as outwards to give it the visual effect of being straight when viewed in elevation.

‘It illustrates the technical challenge of the engineering process, but also the power of 3D modelling and 3D manufacturing with CNC machines,’ says Luke Hughes COO, Nigel Shepherd. ‘It’s difficult for clients and sometimes even architects and designers to appreciate how you go from showing a simple curve to a double curve with rake. In the olden days, when we had to draw on paper, we understood these things more because we had to draw the line and work out where it went. With 3D CAD the concept of elevations becomes less clear. The shapes of the top, bottom, front and back rails are all different, because the radius of the curve changes from front to back.’ 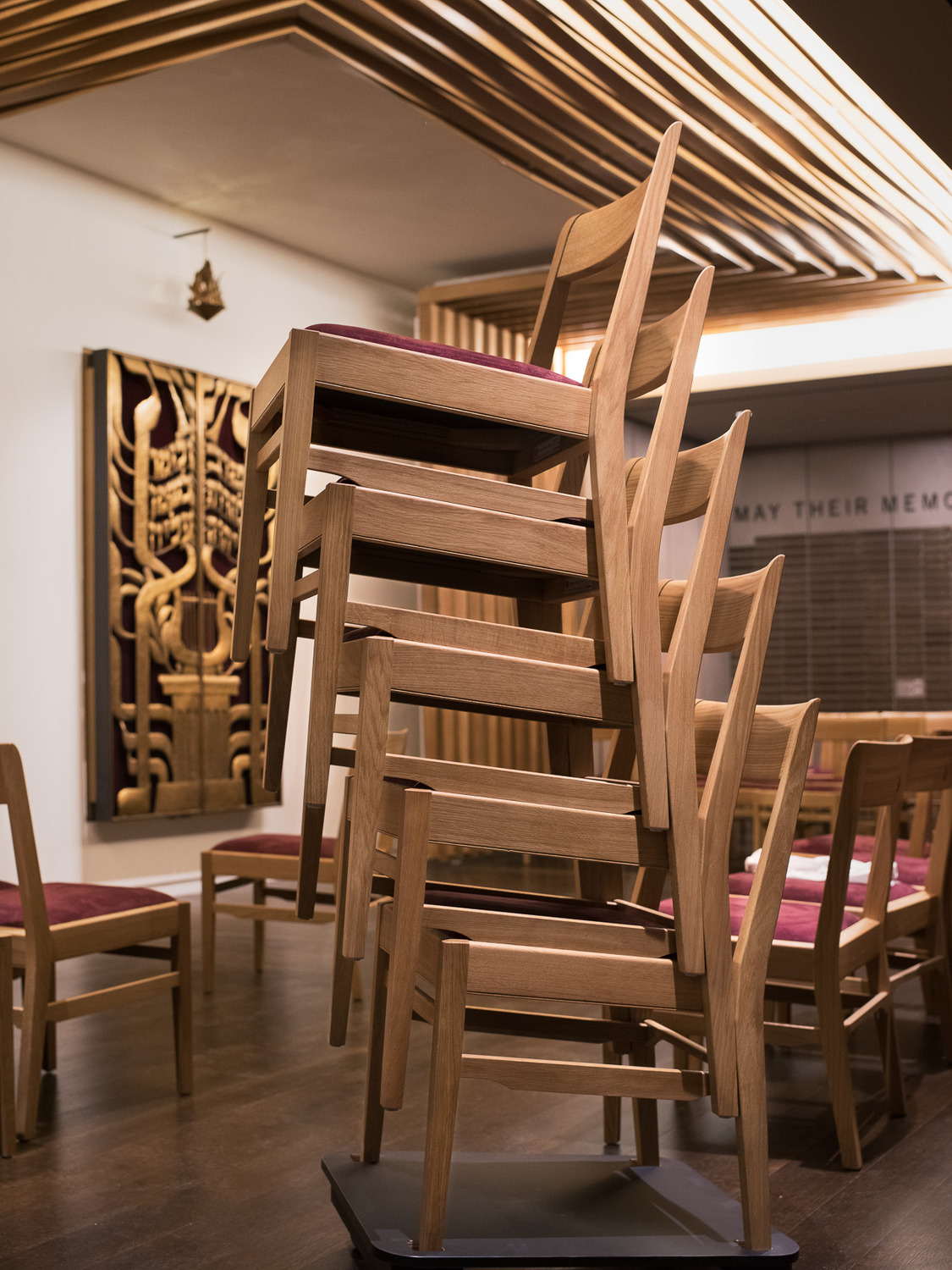 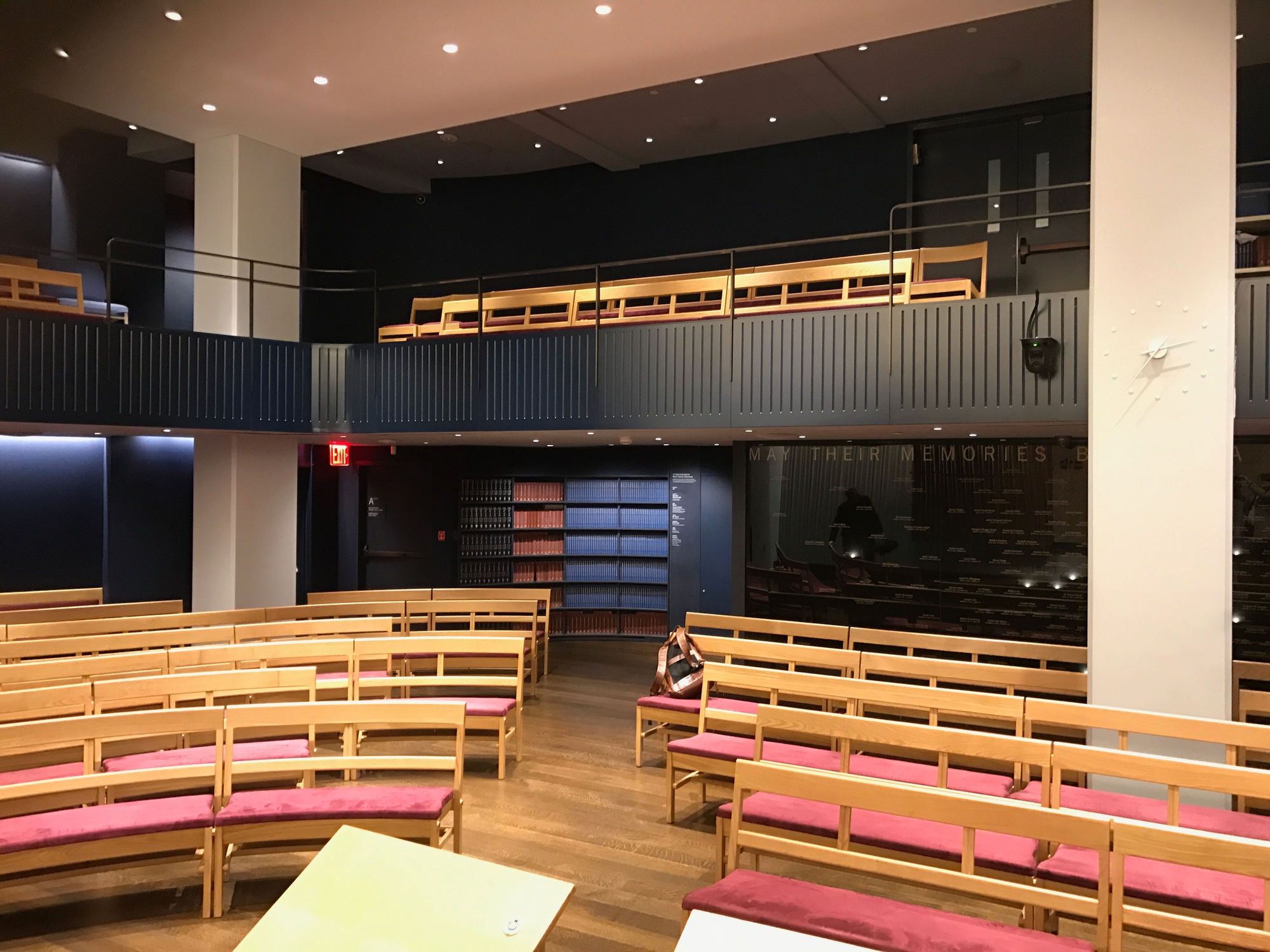 We succeeded because we made extensive use of our design and engineering team’s collective experience combined with CAD software more commonly used in high-end engineering consultancies.

A further challenge was the seamless integration of a full-length bookshelf which needed to sit under the bench seat but not mark the upholstery of the bench below when stacked. We needed to spread the load across the entire cushion. The only way handles to carry the benches could then be incorporated was to use cut-outs in the shelf, which also had to be exactly the same depth as the structural rail to eliminate the compression effect of differently dimensioned components.

During schematic design the furniture layout of the synagogue sanctuary was turned on its axis, putting the Bimah, Ark of the Covenant and reading table on the long side of the room instead of at the end, so the dramatic inclined wall could serve as a backdrop and no member of the congregation was more than 35ft from the Torah reading or Rabbi’s address.

This layout of the synagogue sanctuary incorporates two, three and four-seat benches, with 19 of the two-seaters being curved. Plum coloured velvet plush upholstery adds visual and physical comfort, erasing the memory of painful metal chairs.

The sanctuary, with its Memorial wall, was furnished with custom versions of the Luke Hughes stacking Lincoln timber chair, and Athena folding table to maximise the versatility of the space.

The more intimate minyan chapel and flexible meeting spaces use Luke Hughes Lincoln stacking chairs and Athena folding tables. The minyan therefore benefits from being a versatile, multi-use space and therefore plays an important role both in the liturgical practice of the synagogue and in its commercial success as a rentable venue.

The response, amongst both the congregation itself and in the opinion of the architecture critics, was not far short of ecstatic. ‘I really believe that this building is an extension of CBST’s soul,’ says Rabbi Sharon Kleinbaum, who officiated at the service of prayers of dedication in May 2016; ‘[it] will be a place for us to grow in ways we can’t imagine.’

The critics were similarly enthusiastic, not least because there is such a strong appreciation in New York of the city’s architectural heritage. Davidson’s New York magazine review praises the architect for ‘injecting much meaning into a modest space’. He continues: ‘History and symbolism weave through the building in intimate ways… and in the spots where it counts, custom luxury asserts itself – in the pews for instance, made in London by Luke Hughes, which are made of oak, for a durability that is symbolic as well as practical; curved to bring congregants as close together as possible; stackable so the room can be cleared for dancing; upholstered not just for comfort…’ remembering the ‘painful’ metal chairs.

‘Gracefully curved burgundy velvet benches’ is how Marjorie Ingall in Tablet described the seating - “Made by the Queen’s pew maker,” noted Cassell. ‘It was such a beautiful mix of rustic and elegant, geometric-mod and traditional.’

Congratulations for Congregation Beit Simchat Torah came from then President Barack Obama: ‘For over forty years, your congregation has contributed to the Jewish community in immeasurable ways - opening its doors as a house of refuge to those in need and those who are often left in the margins… As you come together on this special occasion and recommit to the values you hold dear, I wish you all the best.’ But the final word must go to Luke: ‘A wonderful thing – we were pleased to be involved. Great client, great architect, great project.’

From concentric rings of stacking and fixed seating designed to be comfortable for those long high day and holy day services, to demountable Bimahs, moveable Arks of the Covenant, reading tables and torah stands, we work with leading synagogues and their design architects around the world to deliver sanctuaries and Minyan chapels of exceptional beauty and easy adaptability.