Combining the best of East and West

An inspirational yet highly functional school library in Beijing

At Luke Hughes our philosophy is to respond, in the language of craft and design, not only to an architectural style, but also to the cultural traditions at work in the institutions and diverse buildings for which our bespoke library furniture is destined.

As a project, the High School Library of Keystone Academy Beijing offered a richer level of cultural engagement than most, neatly capturing the persistent ‘East meets West’ conundrum as a direct theme.

Founded in 2014, Keystone sees itself as a world school founded on three keystones: bilingual immersion in Chinese and English; building character and community throughout a residential setting; and promoting Chinese culture and identity in a world context. 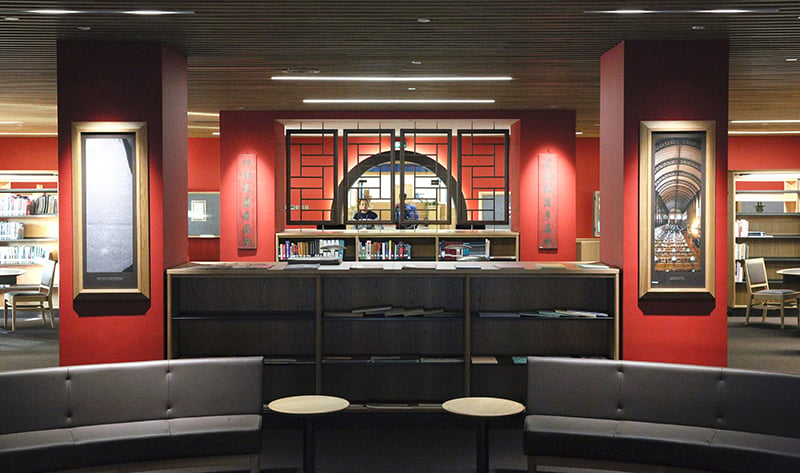 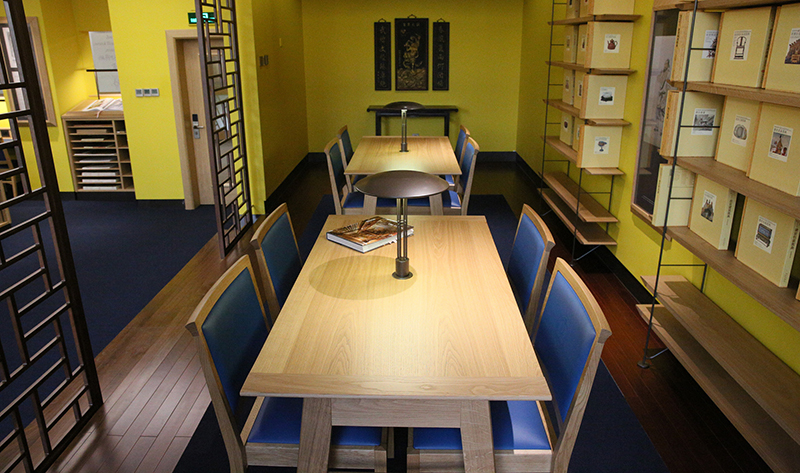 Unusually for us, this story is all about the interior, where there was more a less a clean slate but an unprecedentedly rich inspirational palette of myth, magic, and humanity’s entire legacy of letters. It was, to all intents and purposes, a clean pallet for us to demonstrate our bespoke library furniture design capabilities.

Keystone Director of Libraries Song Jingming’s personal shelf of books provided much of the early inspiration. From Kahlil Gibran to Thoreau’s Walden in Mandarin, Robert Frost next to Tao Te Ching, patterns of porcelain and 300 Tang poems –all close to her desk. Although she had never left greater China, she was completely absorbed by English literature, or rather literature in the English language – what it meant and what it might mean.

The brief was to create a space that was a blend of eastern and western aesthetics and sensibilities, but also to reflect the 21st century world of digital communication and the notion of unlimited access to unlimited information in the bespoke library furniture and decor.

As the project evolved, it became as much part of the brief to convey the values of European and American libraries as they have developed over the last 1000 years, as to project the ethos of Keystone as a modern Chinese institution with an international flavour.

Before designing the library furniture, there was the research and, indeed, the task of making the basic contract-finish interior a suitable blank canvas. 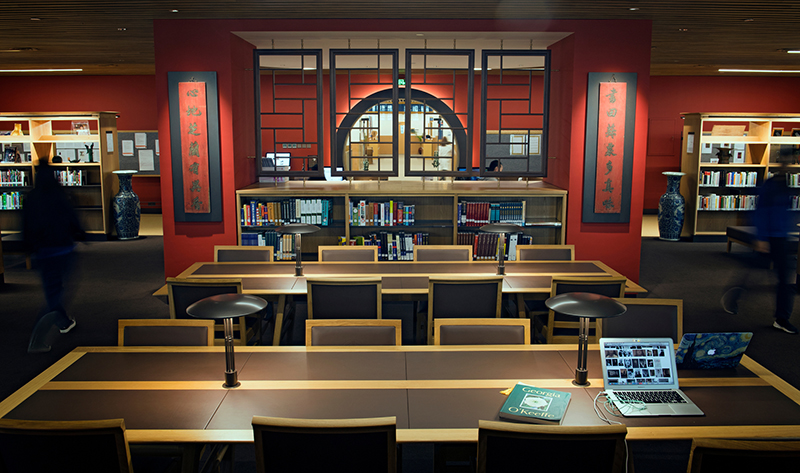 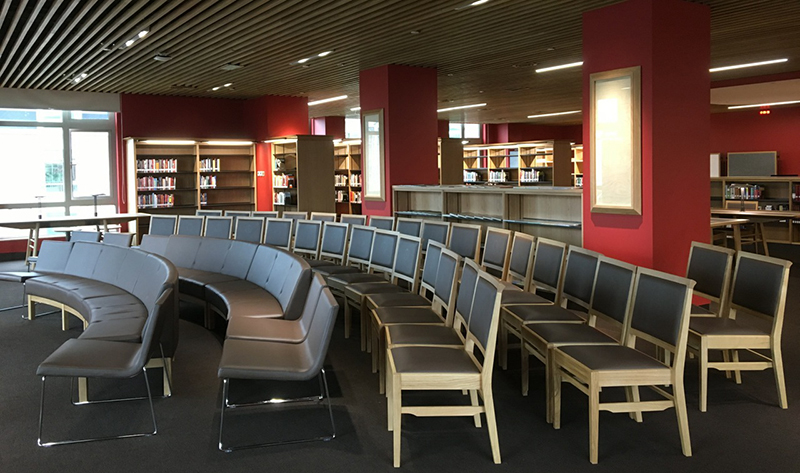 Schematic design began with layouts, aiming to establish how the space would work; how flexible it could be, how the lighting would work, how to create well-lit spaces which are also sheltered from the sun. Then came the research into China references, drawing from a whole range of elements and images including an exhibition of silk paintings at London’s Victoria and Albert Museum or a picture of an old Ming dynasty scholar falling asleep over his books.

An unprepossessing interior space was transformed with the use of colour and bespoke library furniture.

The simplest thing the design team could do was paint it in traditional Chinese colours, and use colour as a device to differentiate the different zones. The yellow glaze of a Song Dynasty vase is considered in Chinese tradition as amongst the most beautiful and prestigious colours, signifying neutrality and good luck, while the deep rich red of the ‘Moon door’ surrounds, which carries through most of the library, is the colour of good fortune and joy.

Some of the reading tables were smaller, with the distinctive Luke Hughes Mercury ‘tri-arc’ top and the stainless steel base from the Curzon range, adapted to carry a leather top, distinctive ‘upside down waterfall edge lipping and splayed-leg features intended to suggest a certain oriental flavour, all wired for power and data. 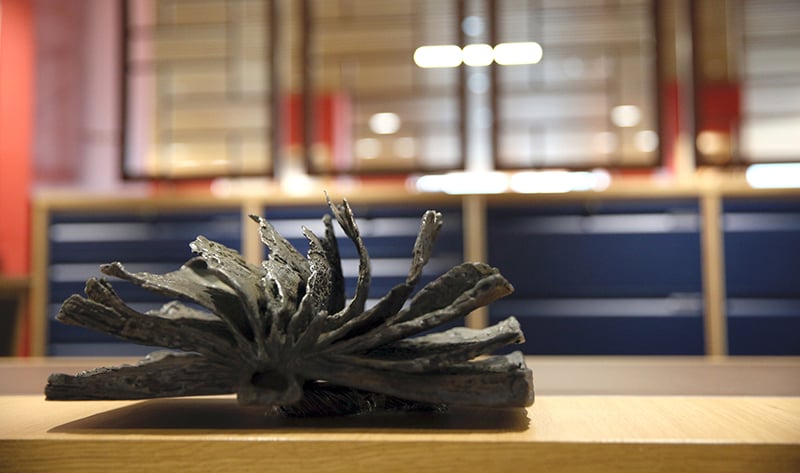 The positioning of the floor boxes (pull-throughs) was still uncertain at the time of making, so - considered somewhat surplus to requirements at the time - covered grooves were machined in all the legs to make sure cable could be run up whichever leg proved closest to the floor box.

We allowed for standard UK-sized cabling. This is approximately 8-9mm (5/16in) in diameter, but when the furniture arrived on site we discovered that the cabling installed was significantly thicker, up to 13 or 14mm (1/2in). So all the grooves were necessary, as it turned out.

The team at Luke Hughes also designed the fixed lights on the reading tables to maintain the understated Chinese look.

There was a conscious attempt in the design process to take some of the furniture forms illustrated in silk paintings from the Ming and Song dynasties and give them a contemporary twist, but the project needed more than just bespoke library furniture to create a vital academic environment, and it is rich with a range of decorative ideas that demonstrate the depth of our experience with libraries.

Artworks, which are considered fundamental to the success of the space. The project team, which included Academy Founding Principal Malcolm McKenzie and librarian Song Jingming, collected antiques from Beijing architectural salvage yards, and enhanced the columns with 24 long narrow pictures of libraries and literary icons round the world and throughout history.

Letter-carver Caroline Webb was commissioned to cut English-language quotes and aphorisms into slate, and Dong Han, a biologist and calligraphy teacher at the Academy, provided beautiful inkbrush lettering in Mandarin.

Aficionados will recognise the British Museum from the mid-19th century, when Karl Marx was writing Das Kapital there; the Strahof Library in Prague because that is the central Jesuit library in the world, and the Jesuits were the main link between China and the West from 1595 onwards; and even the Rosetta Stone, a translator’s library in itself being the link between cuneiform, Ancient Greek, and Ancient Egyptian language.

The decorative pièce de resistance is the double dragon door handles on the library entrance – ‘The moment when a student physically grabs hold of the sense of these cultural connections.’  Commissioned from Scottish sculptor, Jill Watson, the dragons themselves were the result of painstaking research, involving photography of ‘at least 300 dragons.’ In the final installation both Welsh and Chinese versions of the mythical animal breathe fire at each other across the doorway, embodying the cross-cultural communication at the heart of this centre for academic learning. 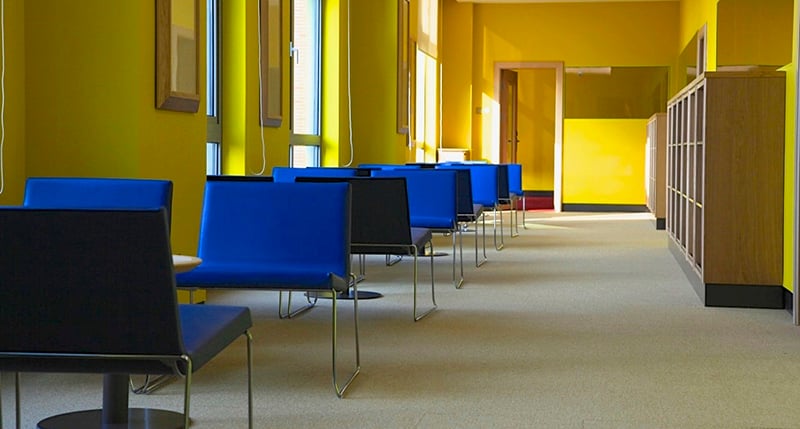 The preliminary interior design in place, the company found itself with four months to design, manufacture, deliver and install 24 tonnes of bespoke library furniture to the other side of the world. Such a schedule is every day business for our planning and logistics teams, using production co-ordination techniques put in place over many years.

16 UK workshops, plus some in Spain and Slovenia, were brought into the process. Every single stick of the 24 tonnes had to be designed to go into the lift cars. No one was going to be carrying all that furniture up the stairs.

The project, five container-loads carefully packed in the correct installation sequence, was delivered under budget and at precisely 8am on the very morning we had planned for and committed to six months before.

Astonishing feats of on-budget, on-time, right-first time, on the other side of the World is what we do.

The client was nothing short of ecstatic. ‘We commit to and value student learning that takes place independently, and the library is a case in point where our students can explore areas of interest, make connections and enjoy unexpected discovery,’ said Keystone Founding Principal Malcolm McKenzie. ‘Luke Hughes has turned our vision into a beautifully conceived, versatile, studious and stimulating environment.’

Director of Libraries Song Jingming’s comment perfectly expresses the genuine delight of both staff and students. ‘Places where the qi (energy) not only draws you in but also speaks of other eras (and values) are so rare. The Jin-dynasty poet, Tao Yuanming, wrote in “The Peach Blossom Land” about a fisherman who stumbled on a magical village where, on entering, visitors lose their sense of time and forget to leave. That is what the library feels like.’

We make libraries inspirational places to be and work.

We are furniture design engineers focused on creating long-lasting, high-quality furniture that compliments the architecture it sits in and the operational needs of those who use the space.  Working with end clients and their architects, we are experts in the adaptive re-use, conservation and new build of libraries, special collections and reading rooms around the world.